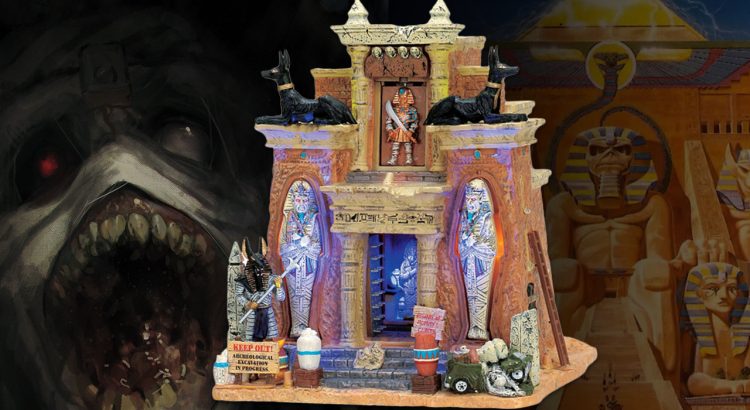 Treasure trackers, fortune seekers, and adventurous explorers beware…today we are looking at the Cursed Tomb!

Animation: Yes – The door opens to reveal spiked trap walls and leads to the tomb’s main chamber. The two vertical sarcophaguses both pivot, and a door on top flips to reveal a temple guard. The operation of all moving parts are fairly quiet.

Sounds: Yes – spooky ancient Egyptian style music plays and a voice yells out “Behold and beware the Curse of the Mummy!”

Lights: Yes – This piece has several lighting states. While the doors to the tomb are closed, everything shines yellow. Everything goes to an eerie purple as the tomb opens, as well as the inside. When the guard door opens up top it flashes from nothing to yellow. There are also several green lights that are pointing vertical on the sides.

One of the most unique get-ups in all of Spooky Town is the ancient Egyptian theme. It calls upon the classic Mummy horror archetype, but with some added modern flair, ala Indiana Jones….and if you are around the age of 30 like me then it probably brings to mind Legends of the Hidden Temple!

The Cursed Tomb is an excellently detailed piece with some of the best paint work I’ve ever seen from Lemax. The tomb very much looks and feels like a crumbling ancient building, and the color palette is perfect.

If you think it looks good in static form, wait til you plug it in! The combination of lights/sounds/animation are some of the best you’ll see from any Halloween building!

Being a classic heavy metal fan, I’d be remiss if I didn’t say it reminds me of one of the coolest album covers of all time, Iron Maiden’s legendary Powerslave. Heck, the temple guard on top even reminds me of Eddie! I would hazard a guess that there are some Maiden fans down at Lemax HQ.

Something worth mentioning is how stout this piece feels, i.e. you hopefully won’t need any glue to keep everything attached and looking good year after year. There isn’t a bunch protruding out from the building and even the animated pieces are well protected by the main structure.

One of the funnest things about village pieces are when they tell a story by way of their details. Based on the excavation signs, wrecked scooter on the base of the building, and the “Beware” sign, it would appear that some explorers ventured in and wound up on the business end of an ancient Mummy curse. Poor saps.

The Cursed Tomb is a show piece. Fantastic lighting, sound effects, music, and animation combined with tricks and traps that await would-be adventurers make this an absolute must own if you are going with a Mummy theme…and maybe even if you aren’t!