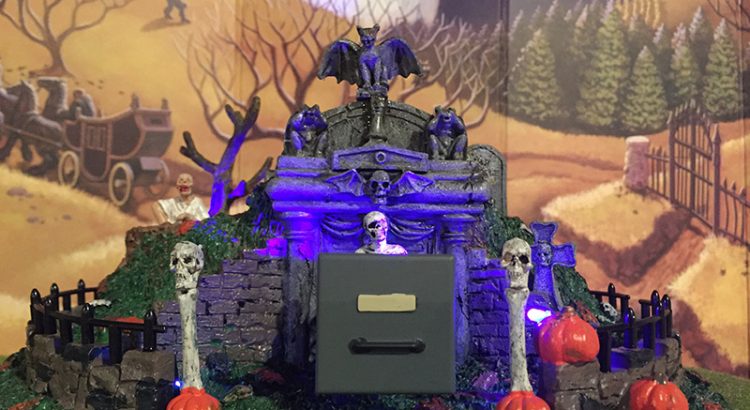 While Spooky Town has many different themes within the line, you can categorize most pieces into two particular ones – Cute or Scary. The Hillside Mausoleum definitely falls into the latter. Let’s have a look!

Price: Around $50 depending on vendor.

Animation: Yes, a ghoul bobs up and down from a hole in the hill while the mausoleum opens and shut with a corpse that pops up.

Sounds: Yes, spooky music plays, there is thunder synced with strobe effects and after popping up, the corpse “talks” to the audience.

Lights: Yes, the piece has several purple bulbs that illuminate to give a spotlight to either the bobbing ghoul or talking corpse. When thunder claps there are white strobes that activate.

The Hillside Mausoleum is not quite a building and not quite an accessory. It occupies a space that’s somewhere in between. You can use it as a centerpiece of a display or as a fantastic accent piece.

As mentioned in the opening, this has a real “horror” theme. There is nothing cute or silly. It reminds me of an Iron Maiden album cover, and this is a VERY good thing. It’s also one of the few Lemax pieces that my young daughters are scared of. Again, this is another good thing (mwahahaha!) in my book.

The paint and finish are very well done. The figures are sorta of “eh”, but the rest looks so good that it’s not a big deal. Very nice detail in the headstones and Gargoyles.

When the sound is off, the it runs very quiet. There is hardly any noise when the coffin slides in/out or the ghoul jumps up and down.

There isn’t a ton of lighting here, but what is is effective. The purple lights illuminate the two different figures depending on which one is active and the lightning strobe with thunder sounds are a nice touch.

Be aware when picking this up that it does not come with a standard plug-in power adapter instead opting for a 3AA battery pack. It does accept a power pack though, so if you don’t want to mess with batteries you don’t have to assuming you have acces to one.

If you have a Graveyard scene in your village and do not have this….why? Go and pick it up, seriously. If you don’t? You should probably pick it up as well. The Hillside Mausoleum has been in production for awhile now, and it’s easy to see why. It’s simple and scary. A great piece to add to your collection!