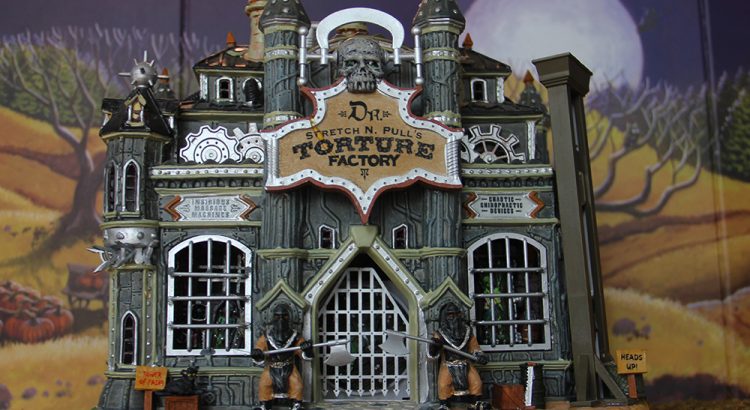 Since its introduction in 2004, Dr. Stretch N Pull’s Torture Factory has long had a reputation for being one of the best pieces in Spooky Town history. Is it all it’s cracked up to be?

Price: N/A as the piece is retired. It’s widely available on eBay for a variety of prices.

Animation: Yes –  The gears on the top of the building churn, the guillotine raises and drops, and the poor sap strapped to the torture rack inside the door spins, and said door raises and lowers. There is a whole lotta action.

Sounds: Yes – the villainous Dr. Stretch N. Pull menacingly taunts would be “patrons” as various screams are heard along with scary background music. The sound has a volume separate from the power and can be turned completely off while the building is still running.

Lights: Yes – Glowing color in each window, doorway is lit in blue, and the “TORTURE” is outlined in green lights while the outside crest blinks in the same color. The skull’s eyes glow a menacing green as well.

One quick aside, I purchased my Torture Factory used and the previous owner got a little messy with the hot glue. Just note that this piece was not like that from Lemax! Also, my crafty wife added the black cat as she is fantastic with modeling clay and a paint brush!

One final note – thanks to astute reader Howard P. for pointing out that only the 2004 model had the working guillotine (as this one does), later year production did not.

The Torture Factory is filled to the brim with detail- from the gruesome bucket of heads next to the guillotine to the iron maidens located within it’s chambers. The paint is fantastic, the characters (especially executioners) are well detailed, and its packed to the gills with features. The size is also quite large, being one of the biggest pieces of ST that you’ll find.

There is one possible negative that potential owners should know about – when operating (even with sound off) this thing is one LOUD mamma-jamma. The whirling gears and constant dropping of the guillotine (CLICK) mean that it can be quite distracting if you like turning on your display in the evening. I’ve found that it’s better to only be turned on for a limited amount of time. Of course, that’s completely a preference.

One of my favorite things about the Torture Factory is general sense of horror and implied menace – this is not a “cute” piece. It’s also the only building that actively scares my younger kids – so that’s a big plus!

This house is widely thought of as one of the greatest pieces Lemax has ever released, and for good reason: it’s amazing. This building comes strongly recommended and makes for a fantastic centerpiece to start a village around!